Daily Mile founder Elaine Wyllie was welcomed to Bright Futures Educational Trust school, Stanley Grove Primary Academy this week, as part of a mission to get the northwest region moving.

Stanley Grove was one of the schools chosen as the location to celebrate Manchester’s commitment to transforming the health and wellbeing of its 2.8m population, by becoming the world’s first every Daily Mile region, with the aim of getting 75% of schools signed up by 2021. Elaine was joined at the school by Mayor of Greater Manchester Andy Burnham and Chris Boardman, Greater Manchester Cycling and Walking Commissioner.

The school is part of Bright Futures Educational Trust and along with all the other primary schools and the special school in the Trust they carry out the Daily Mile with students and teachers. Lisa Fathers, Director of Teaching School at Bright Futures Educational Trust and Chair of the GM Headteacher Group for PE, Sport & Health said: “We are passionate about the value of exercise across our Trust. All our students are encouraged to have healthy bodies and minds and we were therefore delighted to welcome all our guests and be part of the mission to be the first Daily Mile Manchester region.”

At Stanley Grove, even the parents join in on the Daily Mile – it has impacted the whole community. As Year 5 student Udi says: “It makes me feel ready for anything and mentally strong.” 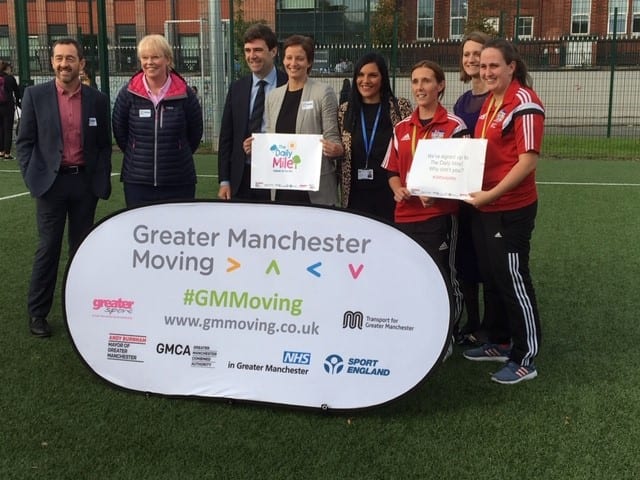 The campaign has had a phenomenal year of growth in 2018, achieving its highest ever public profile and playing a significant part in the national conversation on public health, wellbeing and the fight against obesity. It has been endorsed by significant media outlets and public figures including the Prime Minister, Theresa May and ambassador for Scotland, Wales and Northern Ireland, Andy Murray. Thousands of schools have signed up while research findings from the Universities of Stirling and Edinburgh confirmed the initiative boosts activity levels in class and improves fitness and body composition. In June, the UK Government announced that The Daily Mile would be a key measure in its strategy to halve childhood obesity by 2030.

Andy Burnham, Mayor of Greater Manchester, said: “If we put our minds to it, we can easily embed 15 minutes of exercise into our daily routine. Go for a walk on your lunch break, or take the stairs instead of the lift. The physical and mental health benefits exercise can have is invaluable and I would encourage everyone in Greater Manchester to adopt The Daily Mile into their day-to-day routine.”

Elaine Wyllie, founder of The Daily Mile, said: “I started The Daily Mile 6 years ago whilst the headteacher of a small Primary School in Stirling. It is incredible to think that since then it has been endorsed by the Prime Minister, included as a key measure in the Government’s childhood obesity strategy and that over 1 million children across 44 countries are now signed up. Thousands of young lives have already been transformed by this simple, free and effective activity. I am delighted by Greater Manchester’s commitment and look forward to seeing more workplaces and adults everywhere follow in the children’s footsteps and hope to see everyone in the City-region taking part in The Daily Mile.”